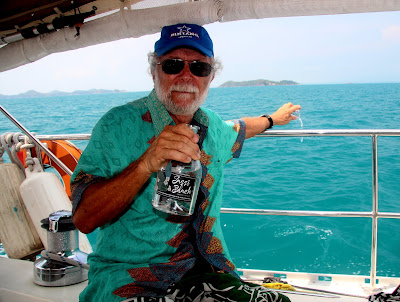 We recrossed the equator Oct 19 at 10:55 (Singapore time). While I'm not one to be religious or believe too much on old tales, I figure you should always cover your bases when dealing with Neptune and his associates. You dress appropriately - in this case you'll see a nice silk Lombok shirt with a Fiji sarong, highlighted with a Bali Bintang hat along with the ever present sunglasses. We decided to offer up a shot from the Southern Ocean, a fine Tasmanian sassafras liquor, to Neptune since we're out of rum and are assuming that it's been a long time since anyone at the equator had something cold to drink. 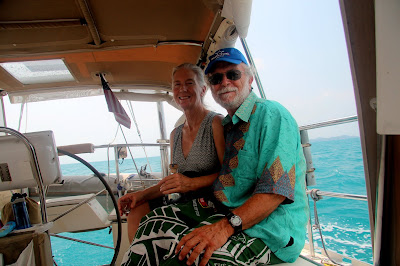 After Neptune got his shot Chris and I took ours. 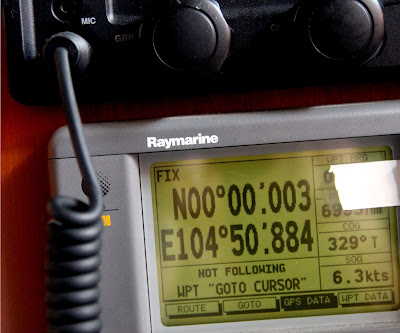 Here we are with our GPS telling us we are just crossing from the southern hemisphere to the northern hemisphere. Technically we are 18 feet north of the equator in the picture. 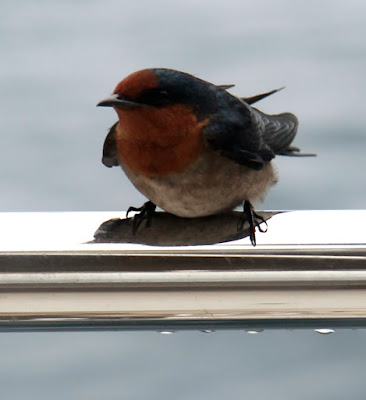 This little swift came along to rest on our railing to see what the celebration was about. I wanted to offer her (or him) a shot too, but Chris insisted that she was too young. 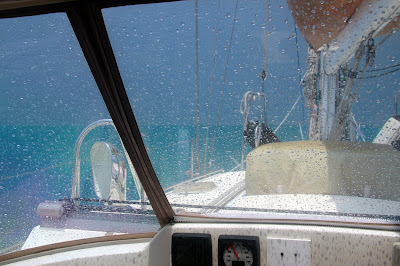 Being in the equatorial zone it didn't take long for yet another rain squall to arrive. These squalls have a lot of rain, and some lightning, in them. The wind speeds so far have been fairly mild ranging from 18-29kts, and not for very long. 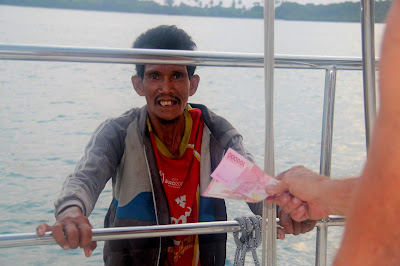 Due to some careful misplanning on my part, we were a little low on fuel before we got to the next stop. We had originally planned to leave Belitung and do an overnight to Bangka. Instead we opted for a three day passages and had a little sailing conditions. So when we anchored at Mesanak island Ali rowed up to us to say high and show off his half dozen English words. After a long, friendly conversation with neither side too sure what was said I asked Ali if he could get us some 'solar' (the word that Indonesians use for diesel, as the petrol company puts that label on the lowest grade of diesel). Ali smiled a lot and said he would. I dug out a 20 liter (5 gal) jerry jug and handed it to him. Then passed over two 100,000 rupiah notes. 200,000 rupiah seems like a lot, but it converts to about usd$14. After much further conversation we all agreed on pagi - meaning morning.
The next morning Ali rowed out to the boat with our jerry jug, came on board and helped fill the tank with it, as we continued our in depth conversations. This one primarily about the merits of metal anchors versus the wood anchor he had. He picked up our boat binoculars and peered through and was very impressed. This prompted us to dig up an old pair of binocs for him. He was over the top happy with that gift.

We are now in Nongsa Pointe Maina, very first world, still in Indonesia but directly across the narrow Spingapore Straits from Singapore and Malaysia. We will clear out of Indonesia today with a little luck and one more day left on our visa. Then in the morning we will motor the 50 miles across to Puteri Harbour in Johor, Mayalasia-- very close to Singapore. This requires crossing the busiest shipping channel in the world. With a little luck we won't end up a bug on the windshield of some giant freighter.

Cruisers notes:
We left Bangka NE anchorage about 3 am local time. Motored past the few FAD platforms in the bay that were all lit up as they were being worked. Arrived at the south end of Lingga Island just at sunset. We past a few fish boats about 25 miles out and few close in, but really very empty. The Scott guide anchorage, A, seemed way too shallow, so we anchored further south of it in 10 feet of water. We didn't have time to poke around to see if we could find the deeper depths in the guide as it was getting dark. S00*18.337, E104*58.775, mud.

Passage to Nongsa Pointe Marina. If possible, plan this with the tidal current. we had 1-2kts with us all day. As you get further north the shipping channel becomes busy with tugs with tows and high speed ferries (23kts) crossing at odd angles. Not really fun in the low visibility squalls. Entrance directions for the marina are on the website.