Broke Free from the Marina - Kinda 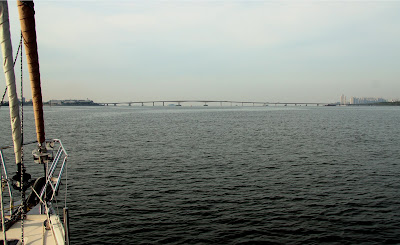 We've finally broken free from our home away from home in Puteri Habour Marina, Malaysia.

After returning from the US, we'd gotten pretty comfortable there. It's easy and cheap to get around with a Grab (Asian version of Uber/Lyft). This is the only marina we'e been in his entire trip that we actually used the air conditioner. It is pretty brutally hot here.

Got a few boat projects completed, The most important was getting the fridge working again. After a few false starts I managed to get a 13kg (30lb) canister of R134a refrigerant. That's enough to refill our refrigerator/freezer compressor about 19 times, but it was the only size I could find. Now she's humming along and bringing the cooling plate nicely down to 6*F.

We are a cruising boat, not a marina queen so it was definitely time to for us to start moving again. It is always difficult when you have to say good bye to old and new friends. We managed to hang out with Carrie and Owen and family, old sailor friends from Washington who are now living here, while we were here. Last time we saw them was in La Paz, Mexico in 2011. They teach at the Raffles American School here. And we also spent a lot of time and a few beers with Heather and Steve off the British boat Foo. No doubt we'll catch back up somewhere. 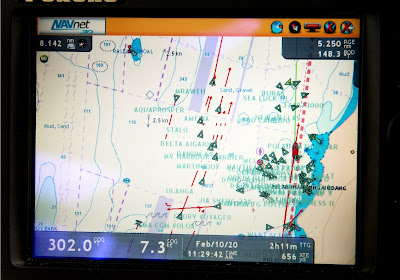 After passing under the Second Link bridge in the photo at the top we were back in the busy shipping lanes and ship anchorage off Singapore. Each of the green triangles above is a large ship. The ones with red lines pointing off them are traveling in the Malacca Strait shipping lanes. The ones with no line off them are at anchor, some waiting to load, some to unload and many just waiting for orders on where to go next. 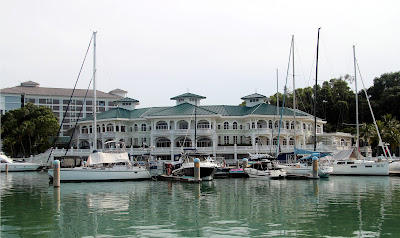 After two days of motoring up the Malacca Straits with night stops at Pulau Pisar and Pulau Besar we arrived at Port Dickson and Admiral Marina. This is the part where we kinda broke free from the marina, as we are back in one now. We decided to stop here for awhile because it is within about an hour drive from the historic town of Malacca (or Melacca or Malaka or Melaka) and the capital city Kuala Lumpur. 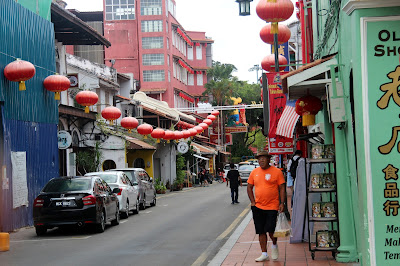 We took a usd$25 Grab for the hour+ drive into the old part of Malacca. This is the area of old Dutch architecture and Chinese shops. 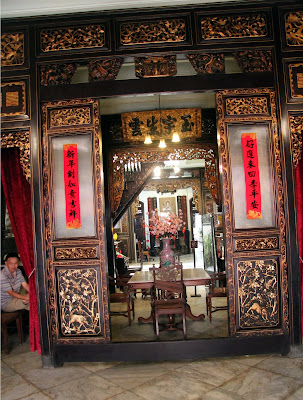 We hit a few museums and old family homes. This is the entry way to the baba and nyonya home. The downtown house for a wealthy plantation owner in the late 1800's. Interesting two story house to walk through although picture taking was allowed inside. The home is still used by the extended family multiple times a year to honor the family ancestors. 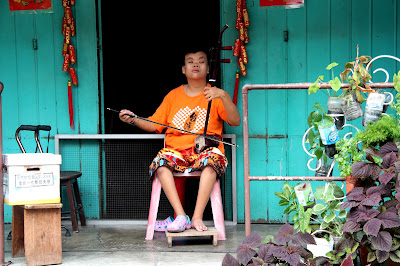 A blind kid making some marvelous music on a local string instrument. 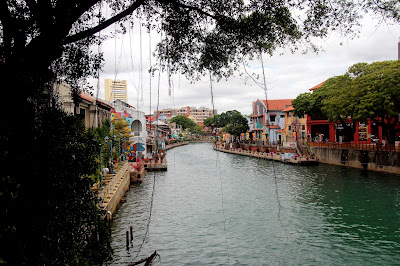 The city is divided by the Malacca River with nice walks along its edge. 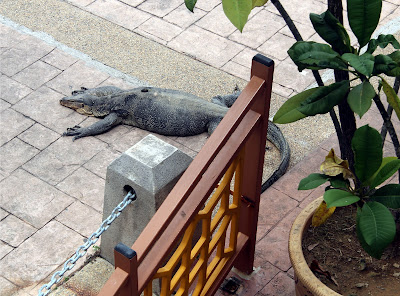 The rivers edge has nice tourist walks, but you do have to be a little careful who you step in front of. 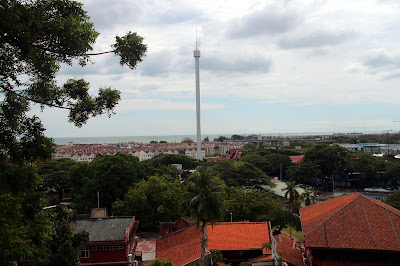 Here is the view from the towns hilltop looking out over the Malacca Straits. This is the view that the local Malays would have seen as the Chinese, Portuguese, Dutch, British and Japanese invaded over the centuries. There's a good history museum that takes you through each of the occupations: Melaka History and Ethnography Museum.

Tomorrow we are off to stay in Kuala Lumpur, or as the locals call it KL, for a few days. 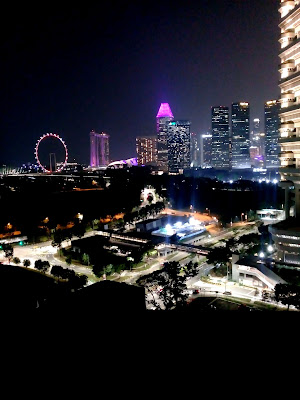 Yea, I know it's a little late for traditional New Years greetings, but I thought I'd catch up as most things are shutdown here in Johor, Malaysia for the Chinese Lunar New Year. We kinda dropped off the blog while doing land travel. Chris' work travel to Kathmandu got rescheduled, so we decided to take the time and head back to the states for the good weather. We flew out of Singapore and decided to spend 3 nights in Singapore being a tourist before our flight. Really interesting, modern city-state, especially after spending 3 months in Indonesia. Modern subways, busy highways, high-rises and clean. As Chris commented, you could eat off the subway car floor. One of the guide books we have on Singapore describes it as Disney Land with the death penalty. You just don't want to violate any of the societal, getting along laws. Prison terms come with caning. That said it sure is an easy, safe place to be a tourist.

We left Singapore on an 8 hour flight o Dubai. Then a direct Dubai to Fort Lauderdale, Florida flight that was 16.5 hours. I never knew those planes could fly that long. It was long enough that I got through the entire HBO Chernobyl series - I learned a bit about the disaster; I had no idea that all of the Russian officials had a British accent.

We did a fun quick tour on the east coast reminding our relatives that we are still alive. Then it was back to Bellingham in the Pacific Northwest to get some serious grandkid time. We also fit in time to catch up with old friends and sons, daughters, and local relatives. To break up some of the weather we did a run to San Diego so we could expose the grandkid to the beach, nice winter weather and friendly horseback riding. It was really a great time short of some of the weather. We spent the last week with the pipes in our trailer frozen. It got down to 13*F (for those that don't use Google Translate to read this blog, that's -10C). A bit of a contrast to the 95*F (35*C) here in Malaysia. OK, even for me that's an understatement. It is painfully hot here in the Puteri Harbour Marina. 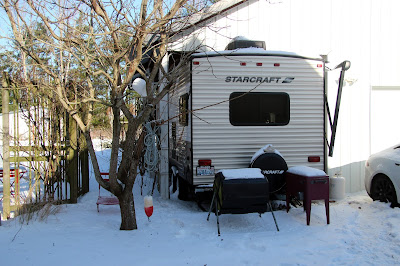 Pipes Frozen but still Cozy Inside. 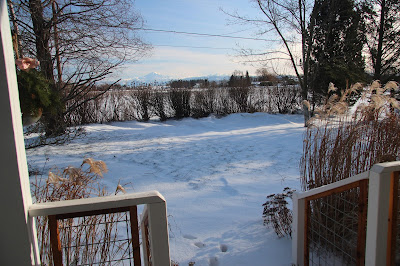 A View of Mount Baker from the Front Porch 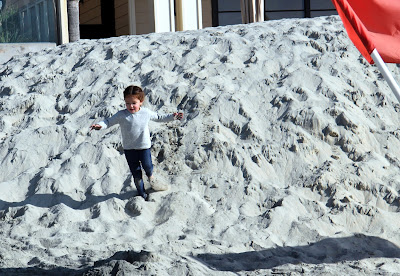 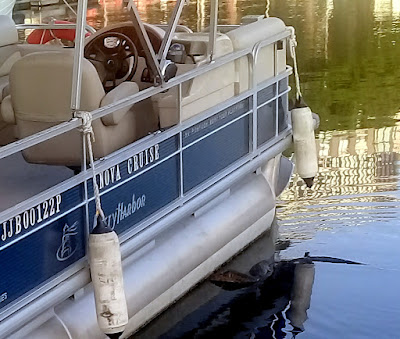 Chris gets back from working in Kathmandu on Saturday. If I can get the refrigeration working we will leave here in about a week. Right now I am looking for a part that appears to be made out of Unobtainium, although it will likely surface once the Lunar New Year is over and the shops open back up.  Plan is to head up the west coast of Malaysia with a few stops on he way incluiding  Pangkor and Langkawi. As long as the borders don't get silly over the Wuhan Coronvirus we will leave Malaysia and head up to Phuket in Thailand so I can get the t-shirt. Then in early Spring the current plan is to head down the west coast of Sumatra, Indonesia. From there start our Indian Ocean crossing, with the first stop being Chagos in the British Indian Ocean Territory, then on to Madagascar and finally South Africa. Lots of miles to cover this season.

Slinging Across the Singapore Straits 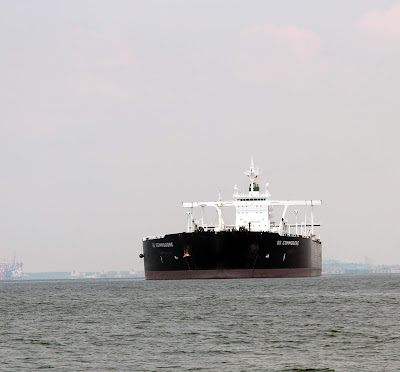 We left Nongsa Point Marina around 6:30 am to start our passage to Malaysia. This required crossing the Singapore Straits  The Straits (along with the connecting Malacca Strait) are the busiest shipping lanes in the world. About 2,000 ships per day transit the area carrying a quarter of the worlds traded goods. We timed our passage with the tidal current, spending hours going at 9-10kts with the extra push. 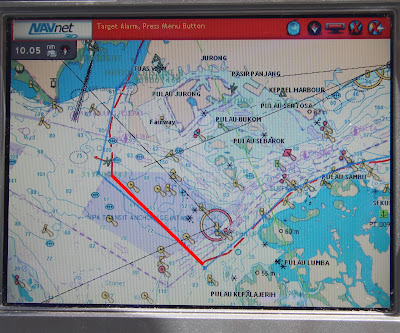 We decided to run along the shipping lanes on the Indonesian side until we could cross at an area where the East bound lanes are widely separated from the West (and north) bound lanes. You can see where we crossed in the pic above. We waited about 15-20 mins. before finding a hole we felt comfortable to cross the East bound lane. The ships are spread out at about a 12-15 mins spacing coming down the lane. That took us into the purple area on the chart that is a ship anchorage. At the top of this area we crossed the West bound lane. We started to cross as soon as we got there but turned around when a new ship showed up on our path. After again waiting about 15 mins for a hole we shot across.

It's not only commercial ships that cross the Straits. 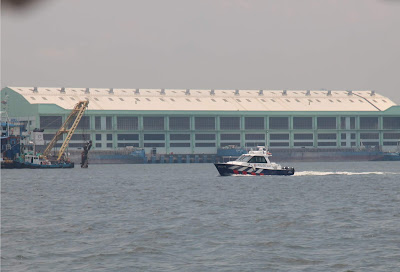 After we crossed the west bound lanes we started up the Johor Strait that separates Malaysia from Singapore. Pretty quickly we were hailed on the radio by Singapore Port Control and were reprimanded for not calling into Port Control on channel 22. A little while later this Singapore Police boat tracked us for over an hour heading up the Strait. The port side (left) is Malaysia and the starboard side (right) is Singapore as you head toward Johor.  There are a continuous group of yellow buoys on he Singapore side. Apparently if you cross over those the police boats come to board you. 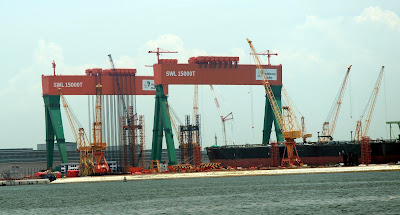 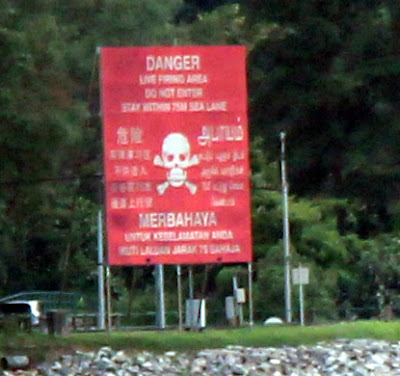 Once you go under the Second Link Bridge, connecting Singapore and Malaysia, you come on the Singapore Defense Force's live firing range.

There's no shortage of construction going on on the Malaysia side. Dense condo living in the background. 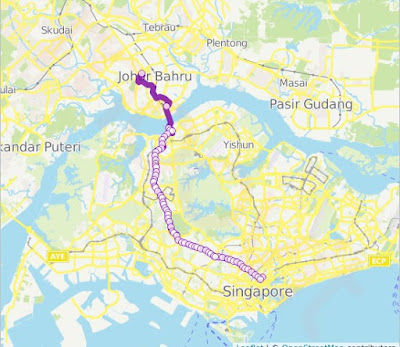 We ended up in Puteri Harbour (middle left of map).  We easily cleared into Malaysia and then had a nice visit with some old friends from Edmonds, Owen and Carrie, who arrived here with their kids on their sailboat Madrona about 5 years ago and now live here and teach at the local American School.

Cruisers Notes:
Clearing in is very simple, almost all handled by the marina office. We received a 90-day visa.
The marina is clean and has nice docks with easy, wide fairways. For those that don't want to go into the marina, you can anchor out in front of it and pay a nominal daily anchor/dinghy fee and get cleared in through he marina office. As I understand it, the customs and immigration officials, located nearby at the ferry dock, will not clear in walk in cruisers.

Paul
Posted by SV Georgia at 11:29 PM No comments: